I chatted with Cindy Hughes Anliker, Communications Manager at Des Moines Performing Arts, to discover more about the Broadway shows in our city. The who. The how. And the perks of our very own performing arts scene. Catch the convo below!

There are a lot of details involved in bringing a Broadway show to Iowa, but I think it boils down to three key things: 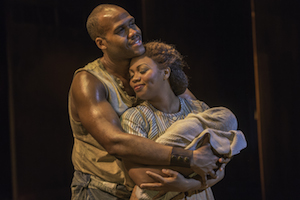 Is there a difference between a national touring cast and the Broadway cast?

A lot of times, national touring cast members have performed in the production on Broadway – as another character, as an understudy or in the actual role they play in the touring production. For example, Sumayya Ali, who plays Clara in THE GERSWHINS’ PORGY AND BESS (coming to the Civic Center April 1-6), was both Bess and Clara’s understudy while the show was on Broadway. Regardless, cast members have impressive careers in theater, television, movies and other mediums.

What’s the perk of seeing a Broadway show in Des Moines compared to bigger cities like New York or Chicago?
Convenience! You can get a taste of Broadway by driving just a few minutes or a few hours from your home. Plus, Des Moines has so much to offer! We have wonderful restaurants, quality hotels, great shopping options and friendly residents. So many of our guests make an evening or weekend out of coming to a show, which is fantastic for our community. Although it’s wonderful to catch a show on Broadway or in a big city, our guests tell us they love the cost effectiveness of seeing a Broadway show in Des Moines.

What kind of economic impact does Des Moines Performing Arts have on our community?
The economic impact is impressive! The Willis Broadway Series alone brings in about $30 million annually to the local economy. This number comes from a formula developed by The Broadway League, which calculates that every dollar of touring Broadway ticket revenue creates a national average of three and a half dollars of local economic impact. Area restaurants, hotels and retailers often tell us they have some of their best weeks of business because of the shows we bring in.

What are some other fun facts you’d like visitors to know about?

Phantom of the Opera photo by Alastair Muir.